Help! I’ve Fallen and I Can’t Get Up!

If you’re anywhere around my age or older, then you know exactly what that headline is all about.

If you’re not, then you missed out on some of the best marketing in history.

The line comes from the commercials of the Life Alert company.

They made a device you could wear on a lanyard around your neck that would connect you to emergency services if you ever suffered a fall around the house and needed help. 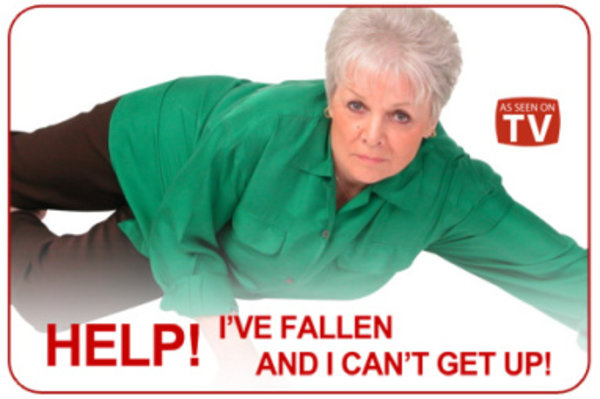 It became a famous catchphrase in the 1980s and 1990s. And many of us have joked about it after taking a little spill.

But falling and not being able to help yourself is no joke. It’s happened to me before.

What if You Can’t Talk?

As a kid, I was what you might call “adventurous” in that I didn’t really have any fear. If it looked exciting, I was on board.

I rode my BMX bikes rampantly through trails in the woods behind our house. My friends and I constructed rickety ramps out of whatever supplies we could find lying around.

We made rope swings out over cliff faces. And we climbed to the very top of any tree with enough branches.

On once such solo climb, I needed to make a little leap to reach the next branch in my ascension of the poplar tree in our backyard.

So I sighted my target, an ample-sized limb about six feet above and to the left of the one where I was perched.

I gathered my strength and let my legs explode like little coiled springs.

And almost instantly I felt the satisfying smack of the next branch as my palm hit and my fingers wrapped around it.

A split second later, I heard the heartbreaking crack of the branch snapping off in my hands and felt the lower limbs smacking my back, legs, face, and everywhere else as I fell about 30 feet to the ground beneath me.

But it wasn’t just ground below me. The stump from that tree’s sister was getting bigger and bigger as time seemed to slow down during my rapid descent.

I landed just about in the worst position you can imagine — with the stump right in the middle of my spine and my head and legs touching the ground.

I was lucky I was still young and flexible and didn’t break my back. But the impact was enough to knock the wind out of me for what seemed like hours (in reality, it was probably only a couple of minutes or maybe even seconds).

I tried to yell for help, but all that came out was a muffled whisper since there was no air to put behind my cries.

I lay there for a good five minutes before I was able to muster the strength to even roll myself off the stump.

Like I said, I was fortunate. Because even if I’d had one of those Life Alert necklaces, I wouldn’t have had the power to push the button.

I wouldn’t have even been able to say "help," let alone the rest of the slogan.

If I’d hit my head on that stump instead of my spine, I might have died just a few yards away from where my mom was cooking dinner that evening.

All That Tech and You’re Still on Your Own

That fateful fall actually changed the way I lived my life. It didn’t make me any less adventurous. But it made me think about what could happen if things went wrong.

Now, as an adult, I still get that adventurous hair pop up from time to time. I’ll jump off a helicopter to go backcountry snowboarding. And I’ll take a week to go backpacking through the Alaskan wilderness.

But I’m much more calculated about the risks I take these days. And I always carry a PLB, or personal locator beacon.

It’s set up to broadcast my signal to every emergency services agency in whatever location I happen to be exploring.

It’s also got a few phone numbers of my emergency contacts programmed into it. They get a text message when EMS gets a call.

Everybody gets my GPS coordinates.

But there’s a catch…

And it’s the same catch the Life Alert system had: I’ve got to be conscious and able to press the button.

If I can’t reach it or if I’m knocked out cold, it’s just an expensive plastic box with batteries and microchips inside.

So even though I’ve got the best location beacon on the market, I’m still kind of on my own when I get out there.

But that might soon be a thing of the past. And for some of my adventurous colleagues, it already is.

The Watch That Saved My Friend’s Life

You see, while my PLB can send out a signal to anyone and everyone who could possibly help, it needs me to tell it when I need help.

But my friend’s Apple Watch… It could tell when he took a bad fall on a rock-climbing trip a few months ago.

And it could tell that he was unconscious when he didn’t respond to the watch’s prompts.

So it called 911 for him and gave the rescuers the details of his location along with some vital statistics.

I talked to him after the ordeal was over and he’d been released from the hospital. He said he remembered reaching for that next handhold.

And he remembers feeling his fingers touch it. And he remembered the feeling of his grip slipping and wondering what was going to happen next.

But he drew a blank on everything that happened after. Fortunately, the watch and EMS were able to fill in the missing details.

He’d fallen over 30 feet down a cliff face and hit his head on a rock shelf below.

He’d suffered a cracked skull and severe hematomas in his brain and was bleeding severely when EMS arrived.

He was airlifted to the emergency room, where he immediately underwent surgery to relieve pressure in his brain and repair his damaged skull.

If it hadn’t been for that watch, his story would’ve ended a lot differently.

The area where he’d been climbing covered a few hundred acres and he was there during the off-season when the trails are empty.

If it weren’t for that watch, there’s a good chance we’d have been wondering what happened to him until the spring when the tourists got back out there and found his remains.

But because of that watch — or more so, the technology now built into that watch — he’ll get another shot at conquering that peak.

And I’ll get to hang out with my buddy at least one more time.

Now, the point of this story isn’t to get you to go buy an Apple Watch or even Apple stock, for that matter.

My buddy has an Apple Watch and it saved him, but I’ve got a Fitbit, and within a few months it’s going to be able to do the exact same thing as his Apple Watch.

And if you’ve got an Android-powered smartwatch, it’s going to have that ability too.

All of them will, because the technology that powered the Apple Watch that saved my friend’s life isn’t Apple’s technology at all!

It actually belongs to one small, little-known company that’s setting up deals to provide it to nearly every smartwatch-maker in the world.

So I’ve asked him to let me share that research with you, my loyal Wealth Daily subscribers.

This kind of technology is already changing the world. It’s already saving lives. And it’s going to save a lot more as it continues to revolutionize our daily lives.

And if there’s one thing I’ve learned over my career in finance, it’s that the companies that change the world almost always create a new generation of millionaires out of their investors.

I want you to be on the cutting edge as one of the earliest investors in this tech.

So I’m urging you to hear what Keith has to say and get yourself invested TODAY.

I’ll be back later this week with more ways for you to stay one step ahead of the rest of the market and pad that portfolio with more profits.