There is a revolution raging right now, as you read this.

Before it's all over, lives and livelihoods will be destroyed by the thousands, dynasties will crumble, and national economies will face collapse.

Trillions of dollars in liquid and material assets will either be lost or transferred.

One of the most powerful industrial sectors ever — the one perhaps most responsible for the rapid advancement of humanity in the 20th century — will be left in ruins.

This isn't going to make the papers because unlike the kind of revolution that's propelled by guns and bombs, this one will come with pen strokes, keystrokes, and handshakes.

But the result will be the same as it would have been had the policy shifts been brought by advancing armies: complete transformation.

This entire sequence of events is being driven forward by one thing: Right now the oil industry is finally starting to meet its apparent successor face-to-face.

No, we're not talking about lithium batteries... We're talking about an actual liquid fuel that burns just like fossil fuel-based liquid fuels and can be used in standard, existing engine blocks — but produces no harmful byproducts.

In the past, it's been used in very limited, highly specialized roles... One of the most famous being powering NASA's X-15 rocket plane, which has held the title of the fastest manned winged aircraft, for more than half a century.

Today, however, this green fuel making is its way into a mainstream industrial market that's been at the forefront of propulsion technology for more than a century and a half: heavy shipping.

For more than 100 years, the world's cargo shipping industry, which transports close to 90% of the world's goods from point of manufacture to point of distribution, has relied on heavily polluting marine fuels such as bunker gas oil and diesel. 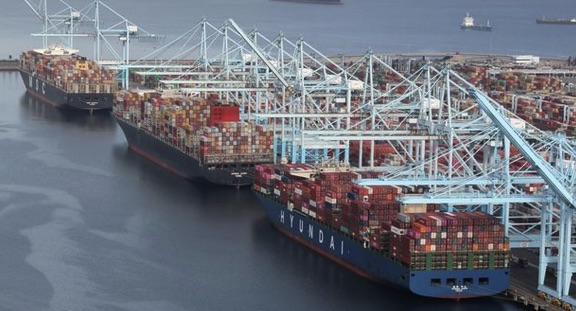 Growing demand for an alternative, however, has finally pushed this issue to a breaking point.

In 2018, the U.N.'s marine regulation arm, the International Maritime Organization, resolved to cut heavy shipping's cumulative carbon footprint by half by the middle of the century.

And this wonder fuel, previously unused in mass-scale applications, has been tapped as the likely candidate.

You've heard the name before, but I doubt you've ever thought about world-saving green fuel when you thought of ammonia.

But despite its decidedly unglamorous reputation, ammonia is actually an incredibly versatile, potent, and environmentally friendly energy source.

It's highly stable and therefore not explosive under normal conditions, and when combusted, the only substantial byproduct is water vapor.

And it doesn't just work for military planes and ocean-crossing cargo vessels. With minor modifications, any of today's mass-produced internal combustion engines can be set up to burn ammonia while retaining all of the same benefits.

Sounds like one of those too-good-to-be-true stories, but it's true. Ammonia fuel is so clean that its exhaust can be cooled and safely sipped from a glass... yet it can still deliver enough power to bring airplanes to the edge of space.

So what's the catch? If it's so great, why isn't ammonia our primary fuel for the consumer and commercial markets instead of gasoline?

Ammonia, up until very recently, was a problem to produce en masse. It was an expensive process that left behind toxic remnants and made its production in the volumes necessary to sustain an energy market simply not feasible.

But all of that is about to change.

There is a new technology on the radar now that's about to change the paradigm.

The benefits over the current standard are as simple as they are dramatic. Ammonia can now be produced using nothing more than water, air, and electricity, and it can be done at a final cost lower than that of producing gasoline or diesel.

These two improvements to the production process instantly give ammonia the potential to compete in the $3 trillion-per-year global fossil fuel market.

In five–10 years, your local filling station could be dispensing this stuff right alongside gasoline. In another five–10 years, it could dispense only this stuff, with gas and diesel a distant memory.

Ammonia's potential for transforming the world goes further than just powering our various modes of transportation.

With production now requiring only the most basic raw materials, ammonia can actually be produced by wind and solar farms as a method for storing energy during high-production, low-demand periods.

Right now, when the wind is blowing and the sun is shining but nobody is home running their washing machines, lithium-ion batteries are used to soak up excess kilowatts. In the future, ammonia production facilities could be adapted to produce and store ammonia to either sell or transform back into electricity during peak-demand hours by using that ammonia to run a carbon-free generator.

Trading Electrons for Fuel and Back Again

The potential is so great it's hard to articulate... but it's safe to say that by the middle of the century, we could easily be running on an ammonia-dependent economy.

The company that holds the patent came into existence, in its present form, for the sole purpose of bringing this technology to the mass market.

It's so new that it started trading under its current ticker symbol just a couple months ago.

Since then, the stock has already nearly doubled.

But even with the incredible attention it has received from the investment community, this company still barely cracks a $60 million market capitalization.

In other words, it's an embryo — a tiny speck compared with the giant market its technology could soon be disrupting.

It's one of the most fascinating and promising investment stories I've seen in years, and because the opportunity here is so new and so volatile, I had to rush a research report and presentation through production to get it in front of your eyes before the stock ran away.

Get all the details right here, right now.

Or wait another day and watch the stock go up another 25%.

The choice is yours.