We went sailing last weekend. The wind was iffy and the current was strong, so it was a bumpy ride, but we still had a good time. It's hard not when you're on the water.

We were making up for not being able to go out on the unofficial boating holiday that is Labor Day here in the States.

The weather was perfect that weekend. Wind was great too…

But we got a lot of rain this summer (in case you didn’t hear), and that means the Susquehanna River was backed up behind the Conowingo Dam.

The river puts a lot of pressure on the dam, and when it gets that high, they’ve got to open the gates and let a few million gallons past.

It’s quite a sight, but it pretty much ruins your boating for the next week or so. Because along with the water comes a few tons of Pennsylvania’s trash.

Here’s what it looks like at the marina a day after the dam spills: 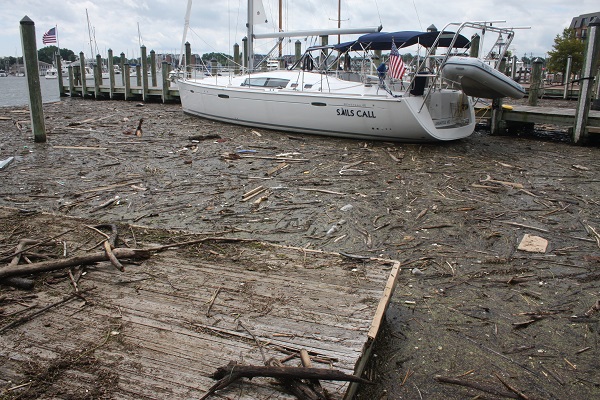 It’s the semi-submerged logs and trees that keep the boat at the dock for that week. But it’s a lot more than just wood that comes downstream when they open those spillways.

Take a close look at that image above and you’ll notice the only thing that makes up as much of the mass as the wood is the plastic trash floating in it.

There’s always a good amount of that in the bay near us, though. We keep the boat just outside Baltimore, which is a city, which are all filthy.

Our problems here in Baltimore got so bad we had to invent new machines to deal with it: 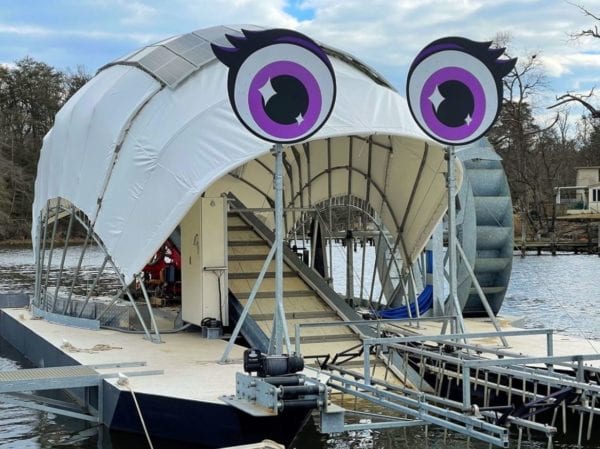 There are the trash wheels that sit at entrances to the Inner Harbor, filtering out all the garbage people toss on the street and into the river.

And we’ve got little trash-skimming boats that cruise the harbor, picking up the trash the wheels miss or that people toss in after the wheels:

But they can only do so much. And if the incredibly liberal-leaning citizens of a city like Baltimore (one that was built on the water) can’t take the time to not throw their plastic into that water, do you really think anyone else will?

"Somebody (Else) Needs to Do Something!"

It’s pretty unfortunate that we’ve got millions of people out there sounding the alarm about climate change, pollution, and other ecological ruin, but we can’t be troubled to even recycle our plastics.

Here's a cold, hard fact for you: More plastic is burned in the United States each year than is recycled.

That’s a lot of carbon being released into the atmosphere. More than all the coal-fired power plants in the country combined.

So it’s pretty obvious that plastic pollution is a problem. And a case can even be made that it’s more at fault for global warming than automobiles.

But it’s also glaringly obvious that the majority of individuals are not going to do anything about it if doing something is inconvenient. I mean, how hard is it to make sure your trash goes in a trash can?

That means the ONLY way we deal with this problem is if focused groups of individuals step in and do something that makes it easy for everyone to save the planet.

And in case you didn’t know, a group of focused individuals can also be referred to as a company.

And he’s convinced it could open up a multitrillion-dollar opportunity for early investors.

I’ve seen his research and the company’s technology firsthand, and let me tell you, it’s some of the coolest, most interesting stuff I’ve ever seen.

I’m kind of a nerd with stuff like this. I love finding better ways to do things. And I love watching the scientific process lead to developments like this.

Somebody Is Doing Something

After five years of R&D and tens of millions of dollars in funding from leading venture capital firms and even the Canadian government itself, this company is nearly ready to roll out its innovative products to customers the world over.

And when it does, it could completely eliminate all the problems caused by plastic: the pollution, the damage to marine life, even the carbon emissions from its production and destruction.

That solution is worth TRILLIONS to the global community. And thanks to Alex’s insight, you can get started with as little as $5.

That’s right… this company is still so unknown that it’s trading for less than $5 a share!

But once its products start showing up on shelves around the world, those shares could run up as high as $500, maybe even $5,000.

So if you want to get in on that upside, you need to hear what Alex has to say right away.

He’s agreed to let me share a special report with you that details the opportunity. 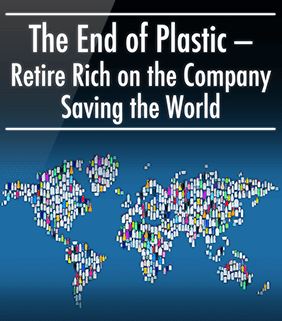 You can get access to it by clicking this link or the image above.

And I highly suggest you do it immediately…

About a year ago, these shares would have cost you less than $1. Today, they’re around $5.

Who knows where they’ll be this time next year?

So check out Alex’s report right now and get yourself invested before the next leg up takes this stock and its investors' finances to completely new levels.