This week, we got more evidence that the ammonia fuel revolution is rapidly picking up momentum.

In a November 17 announcement, South Korea's Ministry of Trade, Industry, and Energy stated that by the middle of this century, the nation expects to be driven, in large part, by carbon-neutral ammonia fuel.

"The ammonia fuel project is part of the government's efforts to phase out fossil fuels and reduce carbon emissions in power production. We plan to complete research and testing processes for using ammonia as carbon-free power production fuel by 2027 so as to achieve its commercialization by 2030, which would effectively reduce coal consumption for power generation," a ministry official said an in interview earlier this week.

By the year 2030, ammonia fuel is projected to account for about 3.6% of the South Korean energy market, as carbon emissions are sliced by 40% from current levels. Ultimately, the goal is carbon neutrality by 2050.

Many of these goals were laid out during the United Nations Climate Change Conference (COP26) earlier this month, but at this point, it's more than just talk.

South Korea has already made arrangements to start bringing in 200,000 tons of ammonia fuel annually from the UAE starting in 2025.

The Writing Is on the Wall

This is just the last in a long string of dominoes to fall for ammonia as a viable alternative to fossil fuels.

Prior to the COP26 conference, the highest-profile proponent of ammonia was the global heavy shipping industry, which already sees ammonia fuel as its marine diesel replacement through the end of the century. 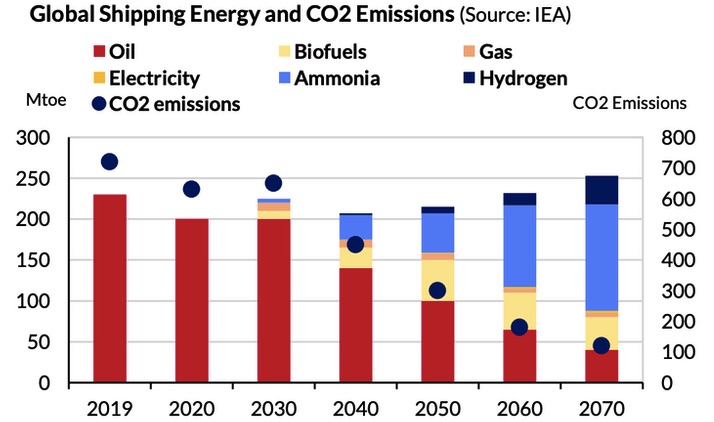 All of this points to one inevitable outcome: Ammonia is going to be among the front-runners for the post-fossil fuel world.

But here's the big-picture element that many investors may be missing...

Ammonia's takeover will affect all applications where gas or diesel currently reigns king. Why? Because ammonia fuel can be used inside a traditional engine block, which makes the transition from one economy to the other far more seamless than many of today's more popular solutions.

Just think... All the benefits of a carbon-free world, but no need to worry about finding a charging station or whether you have enough charge left to get to where you're going because you don't have half an hour to stand around while the battery returns to 80%.

Ammonia as a liquid can be made available at any pump that currently delivers oil-based fuel.

So why hasn't it happened already, then? For the simple reason that up until now, ammonia was too costly and too dirty to produce as a green fuel for the masses.

Sealing the deal, the overhead is comparable to that of most of today's fossil fuels, which makes it now just a matter of commercializing and adopting the technology.

With the world on a carbon-reduction crash diet, you can bet that there will be plenty of legislation pushing ammonia to the forefront — which should take care of the adoption problem.

Add all these factors together and the image that emerges is pretty clear. We're face to face with one of the biggest commercial and industrial pivots the world has ever seen.

With trillions in annual revenues on the line, to say nothing of the ecological future of planet Earth, this will make the switch from analogue to digital look like a minor consumer tech trend by comparison.

That leaves us with just one question: How, as in investor, do you play this opportunity?

Well, as somebody who knows the benefit of risk, I'll give you the same response I always give: Go straight to the source.

That technology I mentioned earlier, which allows for the carbon-neutral, economic production of ammonia fuel, is the patent-protected IP of a recently formed Canadian technology company...

Not some multinational giant or multi-interested conglomerate but a tiny firm organized around the singular idea of cheap, clean ammonia fuel for a vast array of applications.

This company currently trades for less than $100 million, but the industrial sphere it stands to disrupt is worth many thousands of times more.

I don't want to say much else here because, as this is a public company, giving too many people information on it will lead to unnecessary volatility for existing shareholders.

What I will do is offer you exclusive access to this video presentation.

It covers all the basics and all the technical details you'll need before making any decision.

Access is free and instant and requires no registration or email address.