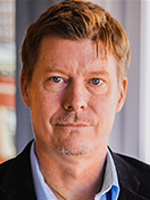 He's known as the original "Bull on America."

For the past 20 years, Brian Hicks has shown investors how to profit from America's innovative economy.

Whether it's disruptive technologies like hydraulic fracking — which has ignited an oil and gas boom in America — or robotics, nanotech, and biotechnology, Brian prides himself for being ahead of the trend.

Brian co-authored the 2008 book, Profit from the Peak: The End of Oil and the Greatest Investment Event of the Century, in which he predicted the world was running out of cheap, easy-to-get oil.

Thirsty for his next blockbuster, his successful theory for finding tomorrow's winning stocks has landed him frequent appearances on the screens of CNBC, Bloomberg, and Fox News. Along with his television spots, Brian has headlined several investment seminars as well as countless talk radio shows.

A seasoned future trend seeker, Brian holds a Political Science degree from University of Baltimore, as well as graduate-level work in Political Theory and Modern Studies.

In addition to being the managing editor of The Wealth Advisory, Brian writes a weekly for Wealth Daily about high-profit opportunities in the currently tumultuous geopolitical environment.

The Great Reopening: Market Predictions for the 2020s

The Exact Day I Bought Me Some Weed

The Greatest Short Squeeze Ever Occurred in 1922

Was That the Greatest Quarter Ever?

The Best Indicator of a Top I’ve Ever Seen

Everything Is Rising… Especially Anger

The Bull Market in Hysteria

The Greatest Investment I Ever Made Returned $0

This Wins for Most Depressing Headline of 2020

Posted on May 6, 2020
Buffett's Envy: 50% Annual Returns, Guaranteed
Warren Buffett once told investors at an annual shareholder meeting, "...it's a huge structural advantage not to have a lot of money. I think I could make you 50% a year on $1 million. No, I know I could. I guarantee that."