We often make the argument on Tech Investing Daily that energy is the most important element in technology today. More important than computing power, information storage, or security; a revolution in energy utilization will be the first upheaval in the next generation of computers.

For the energy industry, it's a similar situation. Advances in technology are spurring a revolution in renewable energy, and nowhere is it more evident than the solar industry.

Solar energy is itself a tech-intensive method of energy generation. As such, it's populated with companies making electrical components that could easily be classified as “tech hardware.”

What follows is a rundown of stocks we classify as “solar tech” companies. The list avoids the installers and designers, and sticks to the nuts and bolts of solar power. Some of the companies on this list might surprise you as they're not often considered solar companies. 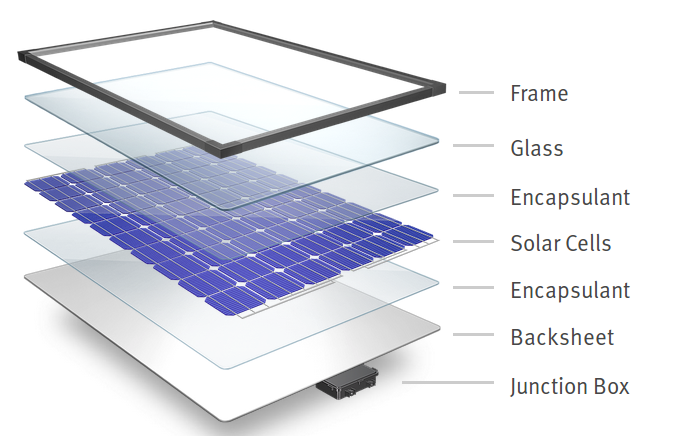 The “meat” in the solar panel sandwich is its solar cells, which are made from silicon and other elements. But for the solar cells to work, they need to have a few outer elements in place. After that, some more technology is required to make the DC generated by the sun usable to the grid. Here's how it works, and where to invest.

A certain percentage of the sun's rays are absorbed into silicon semiconductor material, and that causes the electrons to flow and generate the energy we use.

However, Silicon has extremely high surface reflectivity. More than 30% of light that hits a bare silicon panel will be reflected. This translates into as much as a 4% drop in electricity output. Because of this, solar panels are textured and given a coating of anti-reflective material, called ARC (Anti-reflective coating).

Some solar companies make their own, others buy the coating from companies such as Honeywell (NYSE: HON). Honeywell's Specialty Materials Group based in New Jersey has produced the SOLARC line of anti-reflective coatings since 2009.

While we don't normally think of Honeywell as a solar company, nearly half of its product line is related to energy efficiency. These solar coatings are no exception.

Curbing the reflective quality of silicon is one thing, but actually protecting it from weather exposure is another. This is where solar protectants come into play, this includes encapsulants, backing sheets, and protective films.

Each of these performs a slightly different, but no less important task. Encapsulants protect the cells from damaging ultraviolet light while still allowing them to absorb the necessary wavelengths of visible light to trigger energy exchange. Backing sheets and barrier films, meanwhile, protect against moisture and particulate damage from natural weather phenomena.

3M (NYSE: MMM) and DuPont (NYSE: DD) are both major contributors to the solar materials field, and both offer comparable portfolios of protectants.

Generally, when people invest in solar companies, this is where their money goes. It's the main “meat” of a solar panel, and differing technologies make this an area of great investment diversity.

Some companies make silicon wafers, some make thin film layers. Between these two different categories, there are several different types of semiconductor materials used; from monocrystalline or polycrystalline silicon to organic polymers, from amorphous silicon to copper-indium-gallium-selenide (CIGS) and cadmium telluride (CdTe). The chart below illustrates how these solar technologies break out in the market. 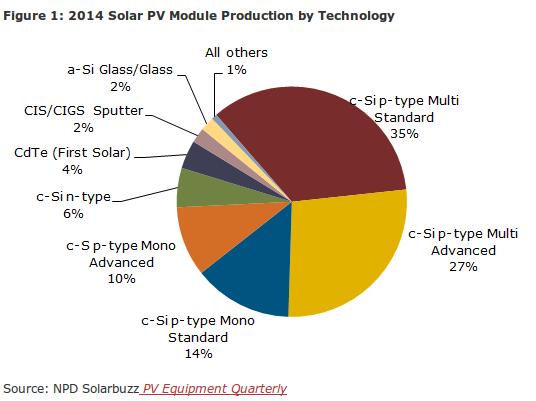 Silicon wafers are made by first growing a large, cylindrical crystal called a boule. The wafers are then sliced from the cylinder in thin circles. Those wafers become the heart of the solar panel.

The multicrystalline variety of silicon wafers are the cheapest and most common solar semiconductor. As such, they command the largest share of the market.

JA Solar Holdings (NASDAQ: JASO) is one of the largest photovoltaic manufacturers in the world, and it deals exclusively in multicrystalline silicon. In 2014 the company saw its shipment volume grow by 105% for the full year. It shipped 2.4 gigawatts of solar modules and 651 megawatts of solar cells for an impressive 3.1 gigawatt total.

For the full year 2013, the company operated at a loss of $14.7 million, but for the full year 2014, JA Solar swung back into profitability, and finished the year with $106 million on a net revenue of $1.8 billion. As a result, the company's stock, which has been beaten down since 2012, has seen an exceedingly high volume of trading, and slight upward motions.

For JA Solar, and indeed all of China's PV silicon manufacturers, 2015 is going to be a big year.

Meanwhile in the United States, SunPower (NASDAQ: SPWR) continues to be the biggest name in exclusively monocrystalline Silicon wafers. The company has teamed up with the University of California, Davis to build a 16 megawatt solar array to power up to 16% of the campus. When completed, it will be the single largest solar power plant in the American university system.

Based on solid earnings and the plans to launch a new YieldCo, SunPower stocks enjoyed a jump in valuation at the end of Q4 2014, along with a ratings upgrade from Morgan Stanley and Deutsche Bank. A consistent top player in solar stocks, SPWR continues to hold promise.

Makers of both poly- and monocrystalline Silicon wafers

Most of the publicly-traded solar wafer manufacturers actually make both types of silicon crystal, which represents a combined 86% of the solar semiconductor market.

Solar panels using amorphous silicon have been commonplace since the early 80s. Solar-powered calculators made by Japanese manufacturers such as Sharp and Mitsubishi brought a-Si technology into the backpacks of American schoolchildren.

The technology enjoyed a rush of activity in 2007, but fizzled in the intervening years when the cost of crystalline silicon wafers dropped to less than half of their previous cost. The cost battle caused a half dozen solar companies to fall off the map: OptiSolar, Sencera, and ECD all shut down.

In 2010, Silicon Valley's Applied Materials (NASDAQ: AMAT) discontinued its line of amorphous silicon panels, and cut a huge number of its workers. Swiss company Oerlikon (XETRA: OBH) divested itself of its a-Si holdings in 2012.

But then in 2013, AMAT acquired the a-Si business from OBH, revitalizing the business it had abandoned.

Applied Materials makes a wide range of chips and systems, and its portfolio of solar power products is unique. In 2014, the company announced a new system for inspecting solar wafers that promises to reduce production costs and raise yields.

Thin film solar modules utilize a very thin layer of semiconductor materials instead of a single crystalline wafer of silicon. The materials are deposited at high temperature on a substrate material such as glass, plastic, or metal and nestled between electrode layers. The benefit to this process is that it has less superfluous conductor material, and manufacturing is a much more streamlined process.

Ascent Solar Technologies (NASDAQ: ASTI) makes thin film CIGS (copper, indium, germanium, and selenium) conductors on a plastic substrate. For the full year 2014, Ascent reported sales of $5.3 million, more than doubling the previous year and setting a record for the company. In early 2014, the company revealed plans to build a 100 MW foundry in Jiangsu Province, China, so the company looks to have a strong trajectory moving forward.

Big Blue itself, IBM (NYSE: IBM), has been working with CIGS technology for nearly a decade, and has published research on a version of the film that uses zinc and tin in place of indium and germanium. The cells of this type, called CZTS, aren't as efficient as CIGS yet, but utilize elements that are far cheaper and far more abundant.

First Solar (NASDAQ: FSLR) by itself has commanded 4% of the solar panel market, and it's the only public company using Cadmium Telluride (CdTe) technology for its conductors. The company says CdTe “presents the greatest opportunity for solar electricity to change the way the world is powered.”

Because of its unique choice for semiconductor material, First Solar's stock often performs differently from the rest of the solar industry. It also offers services independent of semiconductors. First Solar Energy Services operates and maintains 40 Megawatts of power projects from other companies. This includes power plant control and monitoring, as well as performance engineering and forecasting.

One of the biggest contributors to the company's stock value is its agreement with Apple to build the 2,900 acre California Flats Solar Project, which will power Apple's new headquarters, in Monterey, California. With the Apple stamp of approval, a tech company can almost do no wrong.

Turning it into Electricity

Current that is generated by solar panels is DC. For it to be usable in homes, it needs to be AC. This is achieved through a process known as inversion, and this is another major area where tech comes into play. Inversion is done by what else but inverters, and there is a wide range of companies making them. Generally speaking, the companies that make inverters also make the equipment necessary for storage and transmission of solar energy.

Multinational industrial company Siemens (NYSE: SI) has several solar divisions which deal with different levels of business. It has a city and infrastructure division, and it has a low- and medium-voltage division. Its larger scale business makes inverters for photovoltaic arrays and power plants ranging between 10 kilowatts and 2.5 megawatts. For smaller arrays, it makes microinverters, safety switches, and metering units.

Swiss company ABB Ltd. (NYSE: ABB) acquired inverter company Power-One in 2013, on the promise that solar power would continue to grow 10% every year until 2021. The acquisition was worth over $1 billion and gave ABB a full range of inverter technology, ranging from .25 kW micro size all the way up to 3.1 megawatt utility scale.

American company Advanced Energy Industries (NASD: AEIS) makes a range of solar inverters and transformers and their related monitoring and control devices. For the last quarter of 2014, the company's inverter sales totaled $46.8 million. This represented a 9.8% decline over the previous year, which the company blamed on weakness in Europe, pricing pressure, currency exchange, and increased competition.

Meanwhile, German solar inverter company SMA Solar (XETRA: S92) hit a sales peak of €1.9 billion back in 2010 and has been declining ever since. Blaming depressed demand in its home market as well as in China, SMA recently said its high fixed costs drive losses when demand wanes.

On the startup side of the business, Enphase Energy (NASDAQ: ENPH) builds semiconductor-based microinverters which convert energy at the individual solar module level. It builds inverters for both residential and commercial solar arrays, and has recently undergone major expansion into the Asia Pacific region. Following up on its biggest commercial rooftop solar deal in Australia, Enphase signed a supply agreement with Energy Australia, and announced an expansion of an R&D facility in New Zealand.

Solar energy is extremely tech-oriented, and as renewable energy continues its growth toward mainstream adoption, the companies mentioned in the report will also grow.

The U.S. Energy Information administration expects the total base of renewable energy projects to grow by 2.9% in 2015, and 4.6% in 2016. Solar will average 74 gigawatt hours (Gwh) per day in 2016 and yet still only comprise .6 of 1% of the total energy generation. The major shift will be from private, individual solar arrays to huge utility-scale projects. Industrial solar capacity will expand by 60% in the next two years.

The scope of this report was narrow, yet the range of companies to benefit from this growth in industrial solar is broad.

Renewable energy is an incredibly rich and complex field; and Solar energy in particular relies heavily upon tech. Solar tech, therefore, is a major growth sector that will drive down the cost of solar and consolidate into the kind of “buy and hold” stocks that pay off for a lifetime.

Wealth Daily, Copyright © 2022, Angel Publishing LLC. All rights reserved. 3 E Read Street, Baltimore, MD 21202. Your privacy is important to us – we will never rent or sell your e-mail or personal information. Please read our Privacy Policy. Neither the publisher nor the editors are registered investment advisors. Subscribers should not view this publication as offering personalized legal or investment advice. Read our Details and Disclosures.