It's no secret giant corporations dominate the natural resources industry. And they stick with it because it's profitable now — and will remain profitable until the end of days. The industry offers endless possibilities and opportunities for all sorts of investors.

Mining for rare earths, copper, and silver bring an overwhelming surge of profits and soaring stock levels... but the real wealth is found when miners strike gold.

Nonetheless, gold juniors have seen some steep dips in recent weeks. The stocks are hitting record lows in a gold stock sector that has been a top-performing market for more than a decade.

That being said, it’s important you understand why these gold juniors are perfectly positioned with the potential to bring you quadruple-digit gains.

Yes, you read that right: Experienced gold bull traders could have the opportunity to make up to a 1,000% profit!

If you think that's a crazy projection, just take a look at a chart of the TSX Venture market, home to the highest-risk/highest-reward gold and natural resource exploration and development stocks. 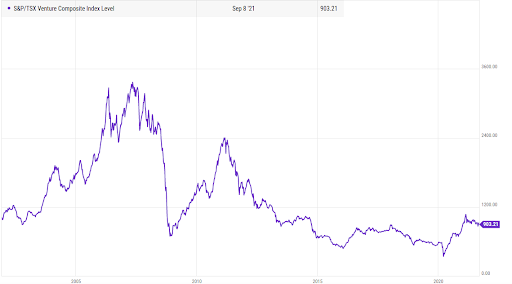 Let’s Break That Down...

If you notice, last time juniors tanked dramatically in the market collapse of 2008 they soared substantially — by about 300% — shortly after hitting rock bottom. From the looks of it, something similar is happening again...

The TSX has obviously taken a nosedive, and now the stars have all aligned — and market forecasts have never looked better for gold juniors.

But How Can You Profit from Their Tanking Stocks?

Well, mostly because everything else in today’s financial markets and economy is equally negative.

No matter how you slice it, any close analysis reveals why the most educated analysts and precious metals experts are unnaturally bullish in lieu of recent gold market corrections. Everyone seems to be saying the same thing: Now is the time to buy — while these exceptional gold juniors are still so cheap.

While the Fed announced another round of quantitative easing in March 2020, meaning interest rates are hovering near nothing and gas prices are soaring, investors worry that perhaps our economy hasn’t really improved at all over the past year.

Investors are truly fearful for the current and future states of the global economy. Such widespread fear alone could send gold soaring to new record heights in no time.

In rare scenarios like these, it is common for junior gold stock profits to spike by 300%–1000%.

Luckily for you, the mainstream media tends to overlook junior mining companies in times of crisis. In other words, if you act quickly, you could invest at a fraction of the price it would cost you to invest in more mainstream gold stocks.

So if you’re waiting for another gold correction, I wouldn’t risk it. With the volatility in the markets, you'll find it well worth your time and money to take advantage of this time-sensitive opportunity.

If you’re not sure where to start, here are a couple of junior gold mining stocks that have caught our attention...

Gold Bull Resources is a small gold company that focuses on U.S. gold exploration and development. It currently has two big projects which it owns 100% of: the Sandman drill program which is located in Nevada and has produced significant gold mineralization, and the Big Balds program, which is also located in Nevada and is getting ready to begin drilling.

Nevada is one of the most prolific gold mining hotbeds in the world, being responsible for over 225 million ounces of gold discovered. If the trend continues, Gold Bull Resources could see its shares fly from $0.20 to $20 and beyond.

Vista Gold completed its second phase of drilling in August of 2021 and announced that it has successfully identified several gold-bearing structures.

If you don’t want the pressure of choosing an individual junior gold miner, then the VanEck Vectors Junior Gold Miners ETF might be a perfect fit for you.

It allows you to gain exposure to the space without taking on nearly as much risk. But with that being said, there is also a lesser chance for life-changing gains.

The ETF peaked in April of 2011 but has slowly declined in the last decade.

With the price of gold ramping up we could see an upward trend for this fund.

At its top, GDXJ was trading in the $160 range. It’s now just above $40 at the time of writing. This could very well be a dip that you want to buy right now.